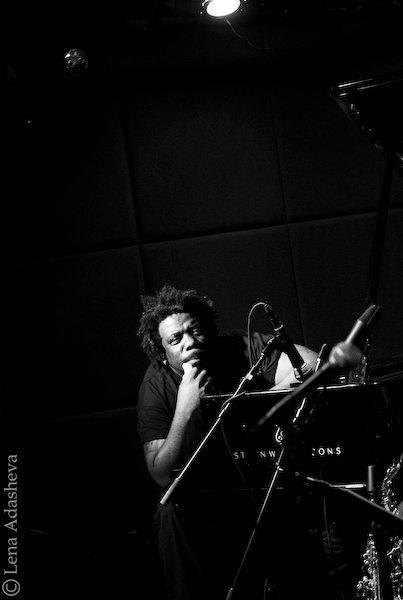 "Eccentricity is an unusual trait in jazz nowadays, but Rodney Kendrick...is eccentric. He has clearly absorbed the baroque styles of Thelonious Monk and Bud Powell, but there's something more knotty about Mr. Kendrick's playing...He flirts with the avant-garde but is also enamored with the richness of swing...Oddness, after so much predictability in jazz, is almost its own reward; Mr. Kendrick offers that and ability, too." - Peter Watrous NY Times

Though he cites Duke Ellington and Thelonius Monk as his earliest inspirations, Rodney Kendrick’s unique percussive and harmonic piano style, due to a distinctive blend of classic jazz piano, 70’s funk, and gospel, stems from his unique upbringing and artistic development. Born in 1960 into a family of musicians, it didn’t take Rodney Kendrick long to realize his calling as a pianist. Judging from his rhythmic style, it’s not surprising that before switching to piano, Rodney’s first instrument was the drums. His two sisters may not have played music, "but everyone else on both sides of my family did, and everyone played or sang in church.” His father, James “Jimmy Kay” Kendrick was a noted musician who was Illinois Jacquet’s keyboardist for seven years, as well as working with Sonny Stitt, Lou Donaldson and Sam Rivers.

By the time Rodney graduated high-school, he was enamored with the emerging sounds of funk and working as a full time professional. He traveled the world with James Brown, George Clinton, R&B harmony group Harold Melvin & the Blues Notes. In his early 20’s, Rodney made the move to New York to dedicate his life to a study Black American Classical Music. He quickly connected with Barry Harris who remained his teacher and mentor for over 20 years. It was through Barry Harris that Rodney was exposed to Charlie Parker, Bud Powell, and Chris Anderson and their unique perspectives on musical improvisation. Throughout his career, he has worked as a leader on 6 albums as well as a sideman on countless more. He has worked with such leaders as George Benson, Freddie Hubbard, Clark Terry, Frank Morgan, Terence Blanchard, J.J. Johnson and Stanley Turrentine. Most notably, he served as Abbey Lincoln’s musical leader for 7 years.

Since 2004, Rodney has produced several albums, including a solo piece titled Thank You, a Duo-piano piece with his mentor Randy Weston, an album with his wife of 10 years titled Rhonda Ross Live: Featuring Rodney Kendrick, as well as a project with his father, Jimmy Kay entitled Black is Back. Discography: The Secrets Of Rodney Kendrick; Dance, World, Dance (1994) Dance, World, Dance (1995) Last Chance For Common Sense (1996) We Don’t Die, We Multiply (1997) No Dress Code (1998) Rhonda Ross Live: Featuring Rodney Kendrick (2001) Thank You (2002) Randy Weston & Rodney Kendrick: Duo Piano (2004) For My Friend (2006) Black is Back (2006)

2014 will see the release of his new trio CD The Colors of Rhythm featuring Curtis Lundy on bass and Cindy Blackman on drums on the Impulse! label.